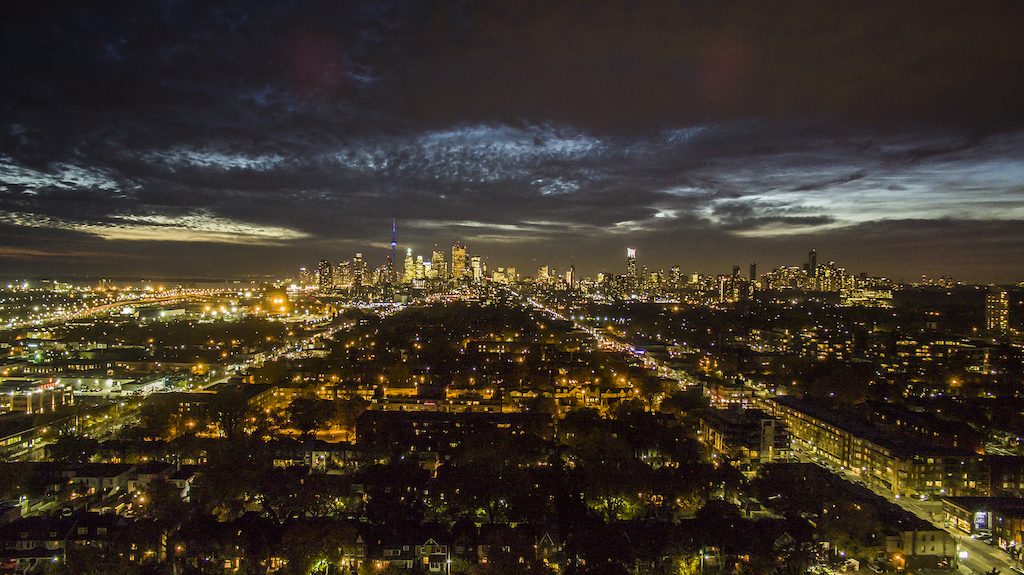 One of these foreign-homebuyer taxes is not like the other.

TD Economics has outlined how Ontario’s Non-Resident Speculation Tax will likely have a more prolonged effect in cooling the Greater Toronto Area’s housing market than BC’s foreign-homebuyer tax had for Metro Vancouver, which is heating up once more.

TD’s economic-research department is now forecasting GTA home prices will rise 12 per cent this year, a downgrade from its previous calls for annual gains of 15 per cent.

“While early yet, a key difference between current patterns in the GTA and last year’s GVA experience is the jump in resale supply in the former market,” reads a new TD Economics report. 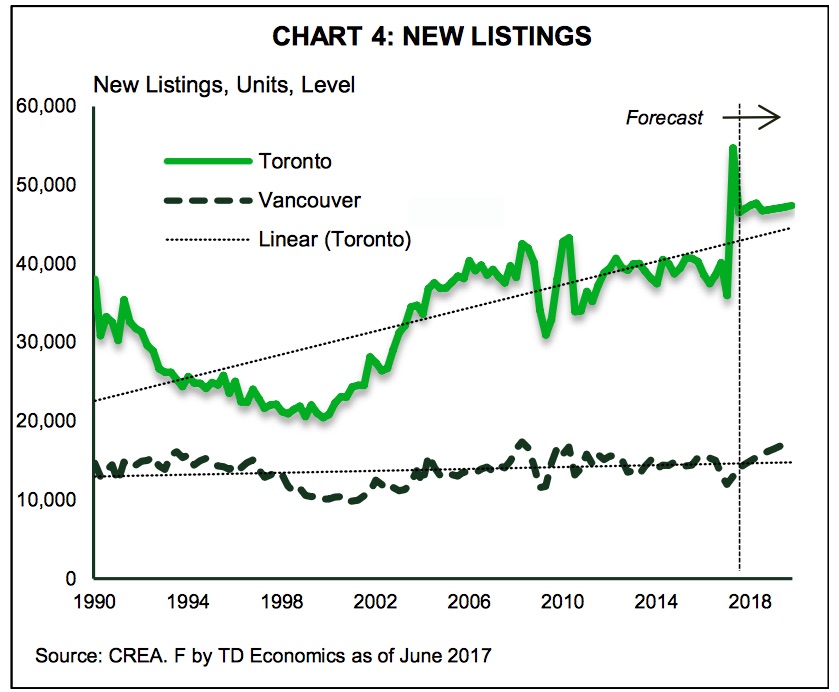 In May, the first full month of activity after Ontario announced it’s Fair Housing Plan, which included a foreign-buyer tax for the Greater Golden Horseshoe, new resale listings in the GTA surged 48.9 per cent on from a year earlier, according to the Toronto Real Estate Board (TREB).

But in September 2016 — the month after BC implemented a foreign-homebuyer tax in Metro Vancouver — listings were down 1 per cent from one year prior, according to the Real Estate Board of Greater Vancouver (REBGV).

“While most measures still point to balanced market conditions in the Toronto region as of May, the additional supply on the market is likely to contribute to a slowdown in home price growth going forward,” TD Economics states.

“As such, the deceleration in home price growth is likely to be more broad in the GTA than has been the case in the GVA,” TD adds.

So a second heatwave for Toronto appears less likely. But in terms of immediate impact, the Toronto market is “mirroring” what was seen in Vancouver in the wake of the levy, TD Economics notes. 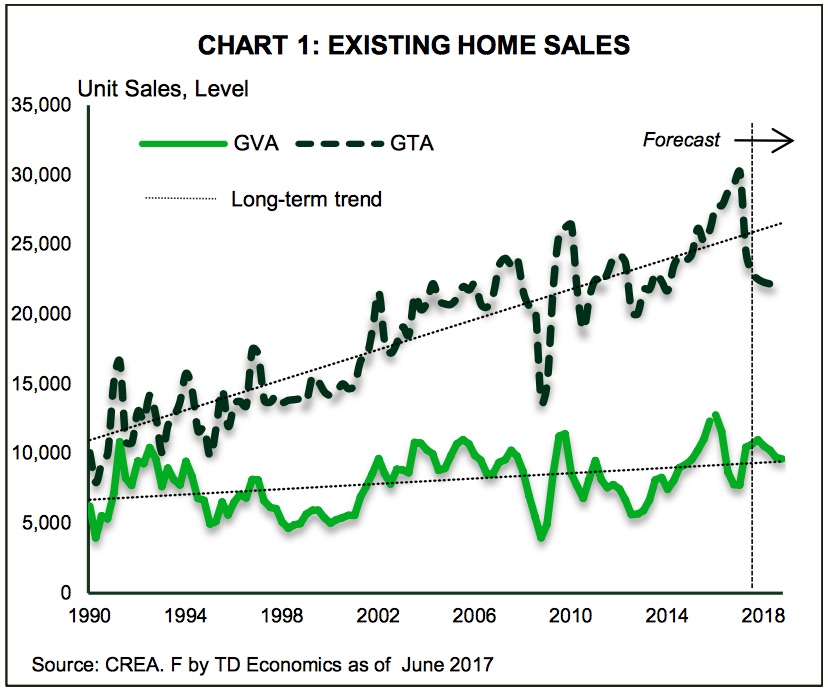 In both markets, existing home sales skidded after policymakers stepped in.

Existing home sales in the GTA tracked 20.3 per cent lower than activity recorded in May 2016, says the local board.

Metro Vancouver home sales dropped 32.6 per cent in September 2016 from that very month a year before, REBGV numbers show.

But since then, the market has recovered even to the point where RBC Senior Economist Robert Hogue recently wrote “overheating concerns in Vancouver are about to enter the housing conversation again.”

In fact, REBGV reported “near record levels” of activity in Metro Vancouver’s resale market last month while the benchmark price of a Vancouver home reached $967,500, up 8.8 per cent from 12 months before and 2.8 per cent over April’s benchmark. 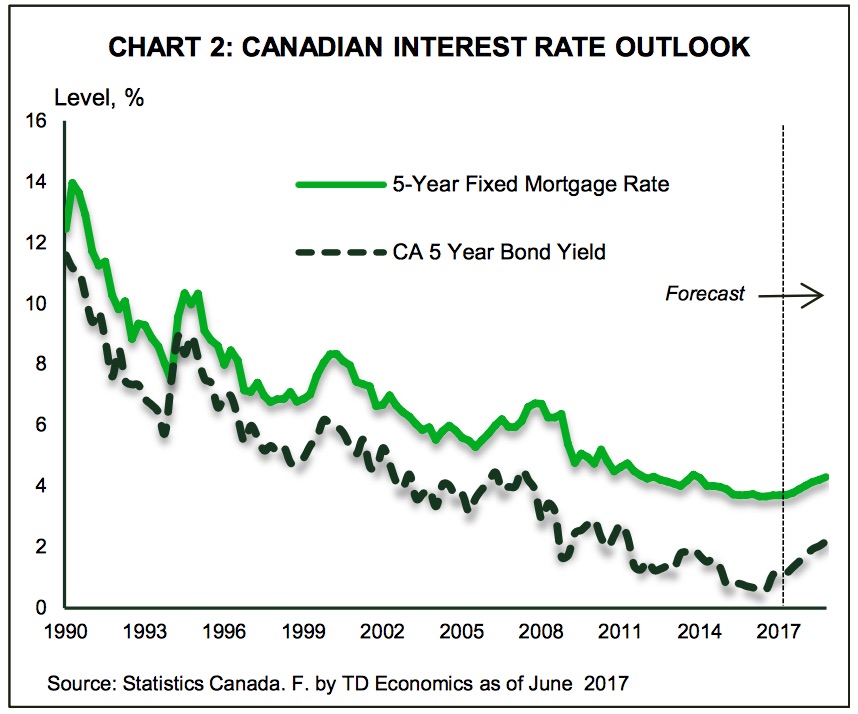 Historically low interest rates cushioned Vancouver from feeling the full force of the foreign-buyer tax, suggests TD Economics — and that’s something the Toronto market may not have going for it moving forward.

“The Canadian economy was on its best three quarter growth streak since 2010, sparking speculation that the Bank of Canada will start raising rates by early next year,” writes TD Economics.

“By the time the GTA is ready to shake off policy changes later this year, interest rates are expected to be higher,” it adds.

Rent control, which was included in Ontario’s Fair Housing Plan but not in BC’s policy announcement last year, is another potential headwind for recovery that’s unique to Ontario.

The measure will curb investment in rental units as those buying condo units to rent them out now have a hard limit on their returns.

With fewer investors in the game, more supply is expected to appear on the GTA’s condo market in the near-term, TD Economics explains.

Still, although the longer-run lookout for the GTA housing market isn’t calling for a recovery like Vancouver’s, a sharp correction isn’t expected either.

TD Economics predicts GTA home prices will decline by 4 per cent next year as a “soft landing” plays out.

After all, the report notes, despite the spike in new listings, resale supply levels aren’t unprecedented.

At the level recorded at the end of May, the GTA’s supply of resale homes would sell out in fewer than two months if last month’s rate of sales persisted and no new listings appeared.

TD Economics says similar supply levels were observed in 2012 and 2013, when home prices rose 5 per cent and 7 per cent respectively.

“The still tight inventory suggests that home prices in the GTA are not headed for a crash.”

Thank you for your sumission. We will contact with you shortly.