Canadian home sales dropped sharply in January to their lowest monthly level in three years amid a retreat in listings as new mortgage rules came into place, according to a new report from a national real estate group.

The Canadian Real Estate Association (CREA) said Thursday that home sales through the Multiple Listing Service (MLS) declined by 14.5 per cent from December to January this year.

December sales hit the highest monthly level on record, citing a "pull-through" of transactions as buyers rushed to get deals done in advance of the new mortgage rules kicking in on Jan. 1, said CREA.

On a year-over-year basis, national sales dropped by 2.4 per cent in January.

CREA said activity last month was down in three-quarters of all local markets across the country, including most major urban centres.

The group said many of the biggest sales declines were seen in Ontario's Greater Golden Horseshoe markets, where sales rose late last year following the announcement of the tighter mortgage rules.

Conversely, sales were up year over year in B.C.'s Lower Mainland and Vancouver Island, the Okanagan Region, Edmonton, Montreal, Greater Moncton and Halifax-Dartmouth. 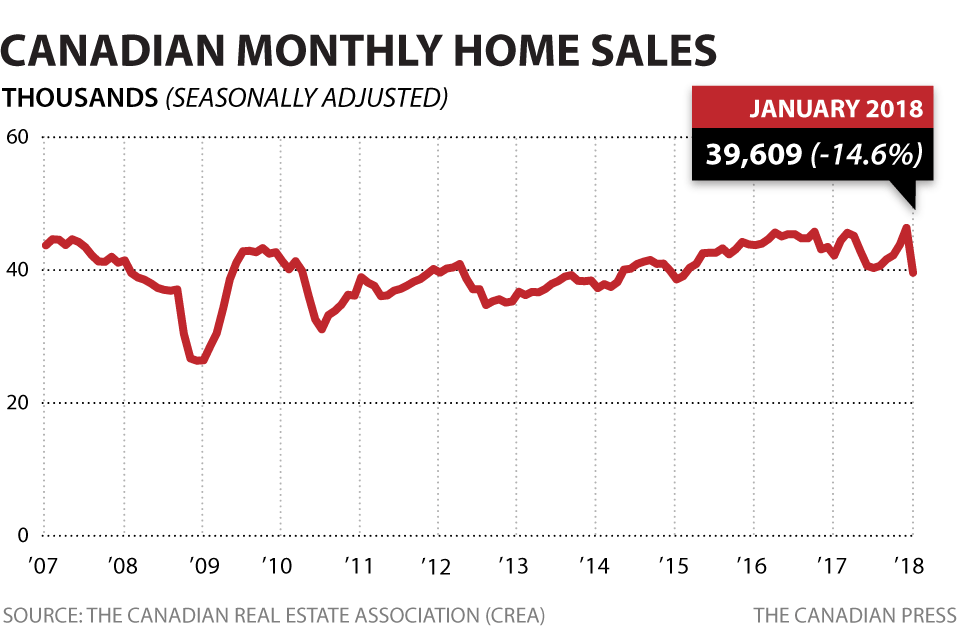 CREA also reported the number of newly listed homes plunged 21.6 per cent to reach the lowest level since the spring of 2009.

The group said new housing supply dropped in about 85 per cent of all local markets, led by a decline in the Greater Toronto Area.

"The piling on of yet more mortgage rule changes that took effect starting New Year's Day has created homebuyer uncertainty and confusion," said CREA president Andrew Peck in a statement.

"At the same time, the changes do nothing to address government concerns about home prices that stem from an ongoing supply shortage in major markets like Vancouver and Toronto. Unless these supply shortages are addressed, concerns will persist."

In a commentary, BMO Capital Markets senior economist Robert Kavcic said Toronto home sales fell 26.6 per cent in January, but added that the slide "almost precisely" offsets the ramp-up in sales over the final three months of last year.

Vancouver sales were off by 10.5 per cent in January.

Kavcic said Vancouver, much like Toronto, has a "deep rift in conditions" between its detached-home market, which has falling prices, and its condo market, which he described as "extremely tight" with prices up more than 27 per cent year-over-year.

He also cautioned against reading too much in the January report.

"We'd maintain that most of the national housing market is well balanced, with local markets responding appropriately to varying fundamentals and policy shocks. In the [Greater Toronto Area], the detached market is still absorbing additional measures taken at the provincial level, while condo markets in Vancouver and Toronto are still heated."

TD economists Michael Dolega and Rishi Sondhi said in report that the country's economic growth and improving job market is expected to support the housing market in the medium term.

However, they added that the new mortgage underwriting rules, higher interest rates, and an elevated supply pipeline will put some downward pressure on sales activity and prices.

"Still, we remain of the view that weakness will manifest as a continuation of the soft landing that has been taking place in Canada's housing market  recently," they wrote. "Ultimately, we expect declining sales and flat prices this year before activity improves somewhat in 2019."

Thank you for your sumission. We will contact with you shortly.